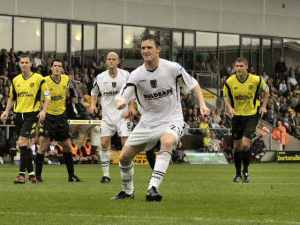 A bloggers’ pressure is that feeling that you have to find something to say. A football blog waits for no man, one game comes and you need to write up your thoughts before another beckons. The pressure, I’m sure you can tell, is almost unbearable.

The Setanta deal offers a new pressure for the club this season. We appear to be Setanta regulars, the Thursday scheduling invariably means the next game will move to Sunday. We’re going to be put into the position of always playing catch-up.

During the Glory Years, we always seemed to have games in hand; which was considered a good thing. Nowadays we seem to have a habit of crumbling under that kind of pressure. Going into games knowing what result is needed is not good for us.

Needing a win is one thing, but one suspects its where there’s an opportunity to extend a lead or make up some ground where we’ll really foul up. Certainly that seemed to be the case last year.

That said, we’re sitting on six points following Sunday’s 2-1 win over Burton when I’d have been happy with four. There’s still a lot of tests ahead; we probably won’t have a decent idea of what kind of force we are until we’ve finally got through the absurd situation of eight games in September. Just to get that into perspective; we won’t play that many games in October and November put together. This early sprint for positions could get ugly.