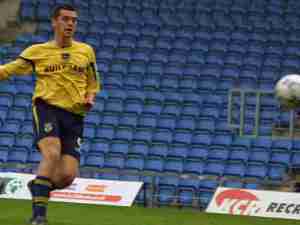 I drove back from Devon on Friday and woke up on Saturday at 6am to look after Little Oxblogger Number 1. It’s fair to say that I was tired when I got to the game. As a result, I couldn’t build up any ire about the draw with Halifax, as much as it disappointed. Some are programmed to spend whole games in a state of angry apoplexy, regardless of how things are progressing, but yesterday’s result was entirely fair. Some Shaw/Duffy class gave us the lead and an obvious penalty provided the equaliser. In between was precious little to suggest that the result should be anything but honours equal.

The angry mob around me focussed much of their venom at Alex Jeannin. They wanted to see him bombing on; marauding up and down the flank. They even questioned why he was in the team. Quite simply, he’s the only truly left sided player we have and bombing on is just not his game. It’s like asking Yemi to play centre back. No player at this level is going to have an all round game; and Jeannin is a passer, and a good one at that. The referee took a pasting for ignoring the last-minute penalty calls when Yemi slumped in the box. But it was a desperate tumble and encapsulated everything about the performance; we’re just not quite there yet.

Time to worry? No, not yet; Dagenham had a point more at the same point last season; Morecambe had two less. Something’s just not gelling and it’s difficult to know what it is. Quinn and Shaw were both excellent yesterday and the midfield looks solid enough. But we are solid without having that extra something. Shaw seems to realise that effort is required to execute class. He has a lot of the Tommy Mooney about him; in looks and performance and could be the x-factor we need. But, at the moment, we’re looking controlled and solid without firing on all cylinders. With the competition around us, we can’t spend too much longer finding our feet, each stumble puts more pressure on, and we don’t need that.