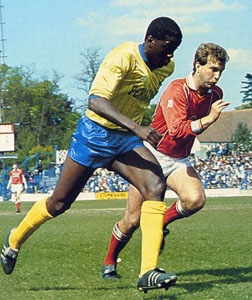 Sunderland Till I Die was a Netflix smash chronicling The Mackems’ glorious march to Premier League promotion that built, like a classic Hollywood fairytale, to a humiliating relegation. They are now led by former Oxford United saviour Charlie Methven and his doe-eyed cash-puppy Stewart Donald featuring a side-order of Wondertroll Chris Maguire. Filming for series two wrapped at Wembley yesterday with defeat to Charlton in the League 1 play-off final. The producers now face the enviable task of committing to film a redemptive story of how this once great club fell to League 1 and heroically stayed there.

Jonté Angle Smith brushed aside his Oxford United woes with a goal for Bermuda in their Gold Cup warm up game against a team of part-time cleaners from San Miguel Azores. As it happens GLS once scored when playing with a spritely part-time cleaner from Ormskirk after drinking San Miguel in the Azores, but that just resulted in a rather nasty itch.

Strong and silent type Niall, ‘don’t call me Niall, it’s Neal, just spelt Niall’ McWilliams insists that negotiating for a better stadium deal with Uncle Firoz is not futile. Donning a colander as a helmet and a rusty bin lid as a shield, the veteran of four winding up campaigns will appeal to Uncle F’s special kind of kindness to take a bit of the toxicity out of the relationship.

The Aylesbury Ashley Young Rob Hall has signed a new one-year contract. Hall has had a wretched couple of years with his football brain writing cheques his knee ligaments won’t cash. KRob is hoping that the witch doctors at the club will have put those woes behind him.

Swansea City are rolling out the big guns in their quest to return to the Premier League. Mr Big Guns himself, in fact. MApp is apparently glaring menacingly at an offer to take over as their manager; look, it’s just his normal face, right?

The original man-bun, Ryan Williams has been called up to the Australian national team. Williams was the break out star of the 2013/14 season on loan from Fulham. If that doesn’t ring any bells then perhaps the words ‘Waddock’ and ‘Animaletes’ will jog your memory. Williams, who was like Ricky Holmes with a more serviceable back, has just left Rotherham, whose relegation has resulted in a call-up for The Digerisoccerdoos’ game against South Korea.

The Oxford United Jedward Mark Sykes and Gavin Whyte will be finishing each other’s sentences and doing attention seeking peace signs in Estonia and Belarus after being called up to Northern Ireland’s squad for their Euro 2020 qualifiers. Expect KRob to make a statement about wanting to play them in a kickabout in the park he’s organising for his kids at the same time.

He may have the continental swag of a Shirley Valentine knee trembler, but Premier League sophisticate Chrïstophé Wïldê could be about to return to his alter-ego Chris Wilder. West Brom are considering an audacious move to drag Wilder back to Championship. Apparently he is unhappy with some off-the-field shenanigans at Sheffield United and may be tempted to leave.