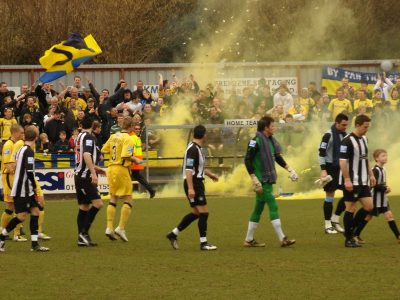 Forest Green Rovers are a funny little club; for a period they looked like one of those clubs that would come piling in, in a hail of money – Histon, Greys – before burning to dust when it all becomes too expensive and difficult to sustain. Perhaps they could have been the next Fleetwood or Crawley; the kind of team that followers of the Premier League are shocked to find are in the Football League at all.

But rather than soaring high or crashing to the floor, they seem to have stabilised and are progressing rather nicely. I recently caught some Conference football on BT Sport and it seems the days when pretty much every club featured an ex-Oxford player are all but over. Eastleigh, of course, are a museum to our conference years, but otherwise it’s difficult to judge just how good a team they are at the moment.

What is true is that they started the season off like a train and now sit second behind Cheltenham. That suggests this isn’t going to be easy, but I also think that Michael Appleton will throw the kitchen sink at the game; it’s been 13 years since we had a Premier League team in the FA Cup and 15 since we had one at home, the law of averages dictates that the prospect of Premier League opposition in the next round is increasingly likely.