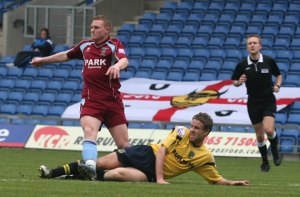 I once watched a game during the Atkins-era from the South Stand Upper and could barely concentrate for watching the dour Brummie practically playing on the wing. He’d appeal for every throw-in as if it was a last minute penalty in the World Cup final. Jim Smith is the same, although his style is more a man exasperated by life, which you suspect would be the same whether presiding over Oxford in a slump or Barcelona on a winning streak.

Whilst it might offer a different perspective on the pattern of the game, Smith’s decision to come down to the touchline at half time may be significant in the way we have played this season. There’s a lot of nonsense spoken by the footballing fraternity about how players are on their own when the cross the fabled white line, but that’s not necessarily true. The manager still has the opportunity to tweak the performance; warn players that are drifting out of position, calm them down when they’re pumping the ball forward in desperation, encourage them and put pressure on the referee. All good managers are animated on the touchline, they don’t wait until half-time to make changes.

Uncharacteristically, we were bright from the start yesterday and able to cement our superiority from the first minute. The presence of Darren Patterson prowling the technical area seemed to make a difference, perhaps it was as simple as his white shorts and socks, but he was there and involved in a way that was never obvious with Andy Awford. Patterson looks like he can make a contribution on the touchline rather than just be a sounding board for the manager.

Yesterday’s win was an all round cathartic experience, showing for the first time in months that we can really dominate a game and capitalise. We scored from headers, from set pieces, without the aid of penalties, Duffy or Burgess. The timing is good; it all but secured the spot in the play-offs meaning we can relax a bit for the final three games. We need to go into the play-offs with nothing to fear, and this can only help.