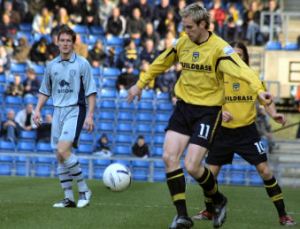 A totally featureless game yesterday. Nick Harris et al were harping on about how desperate we are and how nail biting it all is, but they’ve got airtime to fill. There’s little to fear in the play-offs apart from ourselves. Burton’s performance was typical of all the play-off contenders; organised, reasonable approach play, no punch. There were 15 points available to the six main play-off contenders yesterday and just 8 were picked up. This is a league not blessed with consistency.

It was difficult to judge our own effectiveness given the tactical impotence that resulted from the injuries to Burgess, Johnson and Quinn. We do know, however, that we can play, we don’t concede much, and sometimes, just sometimes, we really can let rip. Finding the magic formula to make that all come together on the right day is key, as Chris Hargreaves mentioned, it may simply be the carrot of Wembley is enough to raise our game.

Speaking of which, was there a air of dissent in Hargreaves’ post match interview? His comment was that we need a settled team and system, and stop chopping and changing. He also mentioned the dropping of Carl Pettefer, which seemed an extreme decision – unless he was rested; it just wasn’t clear.

I’ve got to agree; throughout the season we’ve been effective as a 4-4-2, 5-3-2 and 4-3-3. Every player has had their purple patch. We’ve a decent squad with obvious weaknesses, but it’s now time to settle on a way of playing. These players aren’t good enough to play in a squad rotation system. March is out the way, the title is decided. The final month is now the time to bed a system in.

It’s possible Jim Smith is deliberately changing things to see how partnerships work out and to get match sharpness up; particularly up front. He may already have a firm idea of how he’s going to play April and May; even though it didn’t look like it throughout March. Now is the time to settle. For me, we’ve got to start with Yemi and Duffy up front; for no other reason that over the season they’ve been the most effective. Zeboski and Robinson can come off the bench depending on the progress of the game. Zeboski didn’t look great yesterday, but, in part, that was because he was involved. He doesn’t look a 90 minute player – though again, he may only be playing 90 minutes for match sharpness. He may well be most effective coming off the bench.

Mr Smith, the decision is yours.