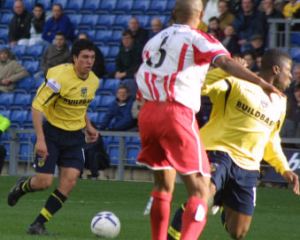 There was calm as we absorbed predictable early pressure yesterday. Players got on with their jobs of defending corners, the fans largely ignored the retreat choosing instead to reaffirm their position of being the left or right side of the London Road and hating Swindon.

There seems to be a growing appreciation of what happens in the opening minutes of games. The new found harmony helped us settle far quicker that we have done, which resulted in the best performance of the season. According to the messageboards some Borough fans think that if it was the best we can produce, then we’re a very sorry side. Granted there was no avalanche of goals; but, quite simply the gap between the two teams was so great that there was no requirement to lay siege. It was professional, comfortable and comprehensive all underpinned by a newly found confidence and work ethic.

The midgets in midfield made all the difference. The work of Foster (who could well be the aforementioned hero we need), Rose and Anaclet (also candidates) gave the likes of Burgess, Johnson and Duffy time to focus on what they’re good at. Burgess reverted to a simple game; suddenly he’s not expected to take every corner, free kick, go past players and spray forty yard cross-field passes (plus, defend and generally look lively). He did simple things well. When under pressure to perform he seems to over-complicate, the less productive he is the more he tries to win over the crowd with his showboats – when that doesn’t come off, the crowd get restless; it’s a vicious circle, but one, perhaps, he’s broken with the help of the little blokes occupying the middle of the field.

There is something about the Dagenham run which, ironically, allows some hope – they’re currently on an unbelievable run of winning six in seven. Can they sustain it until the end of the season – gut feeling suggests there has to be a blip. Last season Accrington were walking it, then had a bad March winning one in six following a ten game winning streak. A similar problem for Dagenham this year, which at this level could come at any time, could open up a chance for an unlikely comeback.