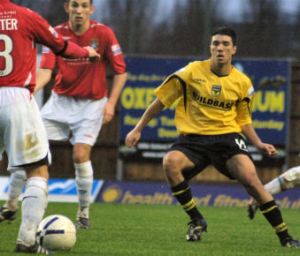 There was distinct disquiet in the Oxford Mail stand on Saturday and not just because of the performance. Many of the Oxford faithful are on a hair trigger, when the going gets tough, the Us start booing. Others are trying to maintain a stiff upper lip and ride the storm. The two schools of thought are becoming increasingly agitated with each other.

Jim Smith‘s angry reaction on Radio Oxford pointed to this. Some would say that the fans have the right to boo and abuse when things are going badly, after all, they’re the people paying the players wages… blah blah blah. What’s more, they’ve had to endure years of decline, and no one feels the pain like a fan. There were others angrily pointing to the fact that this is no good for anyone.

Frustration, yes, but booing a draw isn’t going to help; 1 win in 8, also contains only 2 defeats. Only 6 goals scored, but only 7 conceded. No, it’s not championship form, but it’s nor is it a capitulation. It will be if the sweeping sense of panic continues. When Lewes venture over the half way line on Tuesday don’t be surprised to hear screams of ‘GET STUCK IN! WHERE’S THE MIDFIELD!?’. There was an interesting cameo during the improbable sequence of world class corners Morecambe were putting in during the second half; Georges Santos stood in the middle of the penalty box and gestured for everyone to just calm down. Perhaps we need a few of those old heads in the stand.

A few years ago Reading were in a similar situation to us, languishing in the lower divisions with a sparsely populated stadium. The fans looked around them and became increasingly disillusioned at the lack of progress. They then did something unprecedented; they changed their minds. The decision was taken to simply have fun at games. Games had themes; Hawaiian beach party fancy dress that kind of thing. They decided not to boo, they decided that regardless of the result they would cheer and have fun in the stands. You could argue that they decided to act like an away following. Results improved, not just because the fans had smiles on their faces, but at least the fan-pressure part of the equation was removed. Why not? We’ve got the flag, what about a samba band? silly hats? A charter of positivity.

On the pitch it’s simple; we need goals. When Duffy hit the bar (via a Morecambe arm, apparently) the ball bounced down through the legs of Anaclet to Yemi who blazed over. It says it all really. There are mitigating factors in the goal drought; Basham and Robinson are out, and Yemi is clearly not fit; his demeanour throughout was of someone who didn’t really want to be there and his pace rarely ventured above ‘blistering’. Duffy was better, although no one took a risk to pick up his knock-downs, perhaps Yemi’s injury didn’t help, perhaps he’s simply lost the belief that there will be something for him to run onto. Burgess is playing wide when surely he needs to be sitting behind the front two. The return of Robinson or Basham could free up Yemi to move out to the right where he could do some serious damage. The left is more of an anathema; Johnson looks to be struggling, but he’s not going to go past players and he’s not supported as Anaclet is on the right by Pettefer and Yemi.

Of the new players, Santos looked strong and capable, and offered a new dimension in terms of playing the ball out of defence. Rose bedded in well, if you excuse the pun.

The other great cameo yesterday was the booking of Curtis for angrily batting the Nationwide Building Society badge on his sleeve in front of the Oxford fans. Perhaps he got a good mortgage rate from them or something. As the ref raised the yellow card the shrimpers captain, Bentley, ran fifty yards to protest. Not at the booking, but because he believed it had been a case of mistaken identity; he was the balding fatty who been enticing the crowd two minutes earlier.