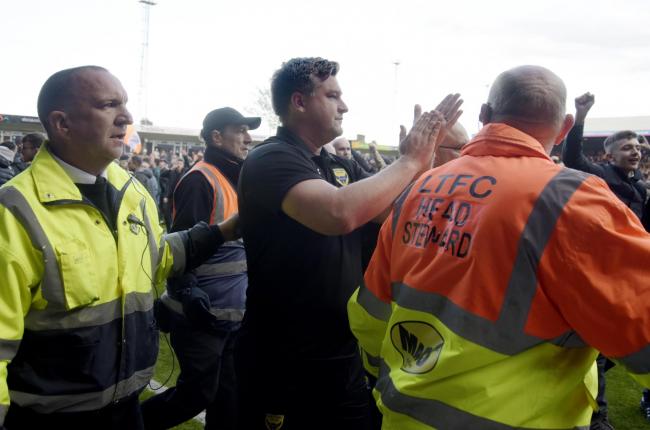 So that’s it, the end of a brutal and bruising year. One where every game appeared analogous of the whole season, yet seemed to signal something different. A season full of contradictions; where we’re owned by the richest people in our history, but can’t pay the bills, where we’ve developed an infrastructure for the future, but struggled for results today, where we spent 84% of the season in bottom seven (55% in the relegation zone) and finished in the top half of the table.

Because of this, I genuinely thought we might beat Luton, but in the end we stuck to the script; which I suppose, was a contradiction to the script-ripping nine months we’ve had.

Perhaps it’s fitting that Luton were champions; it’s difficult not to admire what they’ve achieved as a club. I’ve always seen them as a barometer; how we’re doing relative to each other and what we can achieve. But simultaneously, they (their fans, and perhaps just a minority of them) are loathsome, as their reaction after the game showed. And if you think that them taunting the away end and throwing a smoke bomb into the stand is just the excitement of the moment, then you’re forgetting them doing something similar in 2010 when York City players were forced to into the away end to escape. No set of fans deserve their success less.

In other ways, it’s heartening to see Luton succeed, it gives us a glimmer of hope. In truth, if you look at all our ups and downs over the decades, mid-table in third tier is probably our natural place, despite ambitions stating otherwise. The biggest challenge is that the increments needed to navigate beyond where we are grow by the year. A team can spend £4m on a striker and finish fifth in the third division now.

Luton’s promotion means that three of the four teams you’d think have Championship infrastructures – Sunderland, Portsmouth, Charlton and Doncaster – will still be with us next year. Of those coming down, Ipswich, Bolton (if they survive the summer) and Rotherham are all similarly capable of competing for promotion despite their woes.

For us, bridging the gap and breaking into the top six has to be our target. This season reminds me of Eric Morecambe’s famous line to Andre Previn – we played all the right notes, just not necessarily in the right order. If we want to progress, then we have to be more organised; our season was killed by our form in the opening weeks, which was preceded by a chaotic summer.

The last few weeks have been as entertaining as anything we’ve seen in the last decade or more, even the promotion seasons, which have been laced with anxiety. We’ve been swashbuckling and daring, sparking life back into the club just as it seemed to be on a downward spiral. Even narrowly avoiding relegation in our 125th year would have been a grim way to celebrate.

Any sign the problems that caused us to fail so badly are sorting themselves out may come in the next couple of weeks. Our previous two promotions were characterised by high quality early signings. Fans will always get jittery during May and early-June because signings aren’t flowing in. In the main, that’s not justified because football slows down during those months as people take a well-earned break. However, if our results on the pitch in the last couple of months are a reflection of us getting our act together off it, then maybe we’ll see some signs of that in the coming days.

One thought on “The wrap: Luton Town 3 Oxford United 1”