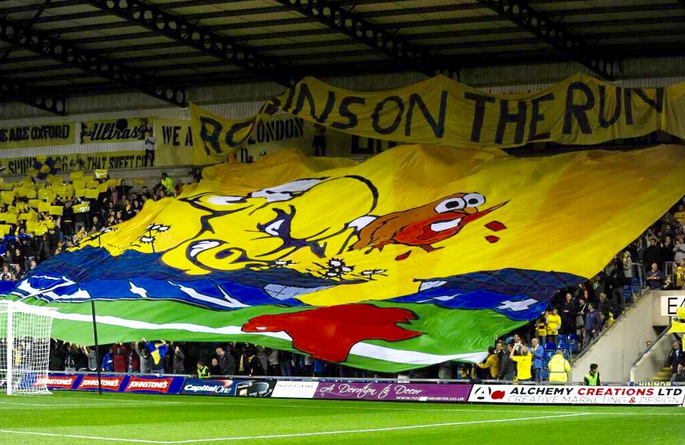 It’s not unusual to forget something when you move house; the bread maker in the loft or the cat. When Oxford United moved from The Manor to The Kassam, we forgot to pack our soul.

Rageonline tells me it was January 2006 about 2.40pm, we were playing Darlington. I was sitting in my car facing the East Stand. It was cold so I took a punt at parking in the car park, when I got there, I had my pick of the spaces. Nobody had bothered to turn up. We lost 2-0.

Two weeks later we were playing Rochdale. The mood was sombre, the atmosphere was dead. We didn’t know it, but the Kassam-era was coming to an end. In a few weeks fans would be storming the stadium in protest; days after Nick Merry and Jim Smith would stride out as the public face of our new owners.

Amidst all the bleakness, spontaneously, the East Stand struck up a heavy rhythm – clapping, chanting and banging seats – it was loud and unrelenting, completely at odds with the meandering on the pitch.

For the rest of the season, although we were tanking on the pitch, the fans started reclaiming their club. At the Manor, we inherited it from our forebears; it’s stories, the giant killings, promotions, the players; all soaked into the walls of the old place. We left it all behind; we became consumers, even though what we were consuming tasted increasingly sour. The fans had to reimagine its relationship with the club.

This wasn’t the start of the Oxford United Ultras, who announced recently they were folding after ten years, but the idea of fan participation was starting to stir. Despite relegation to the Conference, the embers of that idea remained. A giant flag was purchased and unfurled in time for every crushing defeat and false dawn. It was a gallant attempt at creating atmosphere, but the problem was that the noise from the East Stand was muffled and nobody could clap when holding it up.

In 2007, Aldershot Town visited the Kassam. It was early in the season and they were flying. Their fans had hold of their destiny – they turned up in huge numbers, festooned with flags and balloons; a wall of red and blue, willing them to succeed. It was a carnival of the like I’d never seen before. In stark contrast, Arthur Gnohere handled comically in the box conceding a penalty. They won 3-2, then went on to win promotion back to the Football League.

It was a low, but things were looking up. Chris Wilder took over in 2008 and went on a run that nearly got us into the play-offs. We were docked five points for playing an ineligible player, exactly the number of points we fell short by. The injustice of it all ignited something.

The summer was a blur – Wilder brought together a squad full of flair and aggression. Constable, Green, Midson, Clarke, Creighton; names that would become legends.

Off the field things were moving; fan groups, partly fuelled by social media, were emerging, planning and plotting. First pre-arranged areas for home games, then flags, then more. Many of the groups died, or merged, it takes energy to turn pub dreams into reality. There’s an irony about ultra movements; they seem unruly and anti-social, but in reality they have to be organised and structured, funding has to exist, people have to do things to do things.

I’m not keen on military analogies, but we became like an invading army. We had James Constable, Mark Creighton and Adam Murray controlling things on the pitch and a cacophony of flags and banners filling the away end, the air was filled with yellow and blue smoke bombs, our relative size in the Conference had been a burden, now it was becoming an asset.

I’ve said before that I know players rarely support the team they play for, but I want their time at Oxford to be the best of their career. Lower league football can be unforgiving and spartan, the joy of playing with the backing of the Ultras must have been immense.

We swept to promotion on a sea of optimism and a riot of colour. Back in the Football League, despite a couple of memorable wins over Swindon, but the fun started to dwindle. The flags were still waved; banners appeared at the back of the stand. There was something, but it was a battle to keep the energy going, particularly at home.

In 2016, though, the movement peaked. The year kicked off with the now fabled Austrian tour, it is easy to forget that we drew 0-0 playing in the previous season’s kit with no sponsor. What is memorable is the crowd, the bewildered looks on the faces of the players at the fervent optimism. Without that, the tour would have been meaningless.

The plan for the season was uncompromising; we weren’t just going for promotion, we were going for everything. In the JPT we were once again drawn against Swindon. Although they were in a division higher, the balance of power was shifting. The aim was not to beat them heroically as we had in 2011 and 2012, we were going to dominate them on and off the field.

Something special was promised by the Ultras, though the details were kept under-wraps, immediately before the game it wasn’t evident what was planned. As the players emerged from the tunnel, from the top of the East Stand, a flag was unbundled and passed down to the front.

The ambition was staggering; it stretched from the top of the East Stand to the bottom, featuring a giant, angry ox with a robin impaled on one of its horns. I am rarely stopped in my tracks at football; years of following the same club and the same routine does that to you, but this was nothing short of breathtaking.

At the Swindon end, a banner was meekly held aloft, some streamers disappeared into the night sky; we’d won and hadn’t even kicked off.

The season was a blur; against Swansea another display in the East Stand, criminally ignored by live TV cameras, then for the final game against Wycombe, another.

In between, the back wall of the East Stand was festooned with banners featuring a myriad of opaque cultural references – Time for Heroes (acknowledged by The Libertines on Match of the Day), Always and forever, Remember 86, That Sweet City. Even for run-of-the-mill games, the ultras brought life to our soulless home by quoting Victorian poet Matthew Arnold.

Promotion brought another reward – yet another pair of derbies against Swindon Town. A critical aspect of any victory is the ability to surprise; following the giant flag, the Robins knew something was coming. Whatever was being planned, the Ultra’s response needed to be beyond good.

Again, a plan was hatched, preparation was needed. The night before, the Ultras gave every seat in the East Stand a flag. It must have taken hours. The morning of the game was miserable and drizzly, but there was a bigger problem; a great section of the flags had been removed. Swindon fans? Kids? The plan had been scuppered. Or had it?

This is where the Ultras’ work is underestimated; rather than just giving in, they were back in the stadium repositioning the flags, removing the broken ones, making sure everything was right.

And just before 3pm, the effect was heart stopping, a sea of colour another crushing blow before a ball was kicked.

There were so many other displays – against Manchester City, for our 125th birthday, but in the background, politics was playing its part. All displays are going to test health and safety rules, if they don’t, then they’re probably not worth doing. The club started moving the goalposts, the Ultras felt like they were being taken for granted.

Perhaps they just ran out of energy and money, but it seems like The Ultras, the visual spirit of the club, became a pawn in ongoing arguments between the club and the stadium company. Like a divorcing couple using their kids to emotionally blackmail each other. Just after their 10th birthday, it was announced the Ultras would be retiring their flags at the end of the season, but another altercation with the stadium company finally killed their spirit and they closed.

If the Oxford United Ultras’ only contribution was to bring personality back to the club after it had been stripped bare by its owners, that would have been achievement enough. But they grew so much beyond that, they created defining moments in the modern history of the club.

And then some; we live in a world of corporate football, where atmospheres are paid for and organised by billionaire owners. People applaud fan movements, and visual spectacles, if there was a better, more authentic, more spectacular, more ambitious fan group in the country than the Oxford United Ultras, I’ve yet to see them.