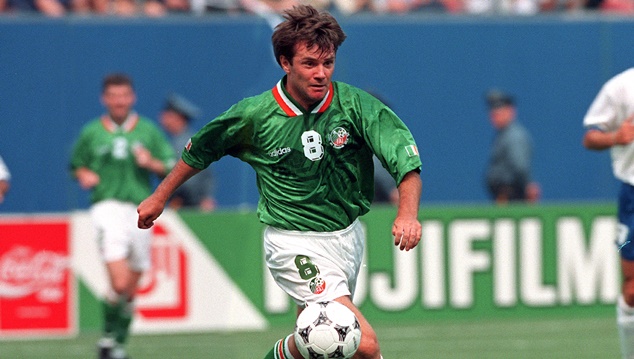 I’ve never been a big one for winners. Maybe it’s something to do with being a second child, or supporting perpetually under-achieving club, or being generally OK at everything but really good at nothing. I’ve always liked those who have, to some extent, flown under the radar, been successful from their graft rather than some perceived natural talent. I’ve always liked Ray Houghton.

In 1985 we had just been promoted to the 1st Division following back-to-back championship titles. As a 13-year-old, I assumed this would be our trajectory for the rest of time. Somewhere there is a video of me predicting that we’d finish 8th or 9th in our first season in the big time and that was just the start.

Eventually you learn that nothing stays stable for very long as architect of our success, Jim Smith left for QPR leaving Maurice Evans in charge of our first season. Jim Smith was always a better manager with a side-kick, and Evans had been at his side during the years of success. He knew the squad and its strengths and so set about the new season in the top division with only one significant new signing; Fulham midfielder Ray Houghton joining in the summer.

Houghton was a stocky busy midfielder, brilliantly under-stated, sitting in the shadow of players – despite his successes – who are still considered legends now. Houghton wrote himself into Oxford folklore scoring the second, and best, goal in our Milk Cup final win in 1986. He also gave a brilliantly unpolished post-match interview which made me like him even more.

John Aldridge was grabbing the headlines during that season and inevitably, big clubs came calling. In 1987, the biggest of them all, Liverpool, came and with £850,000, prized him from our grasp. A year later, it was Houghton’s consistency from midfield that came to the attention of the champions. Through endless graft, a quality he never lost, it was here he became one of the best midfielders of his generation.

In five years he won two League titles and two FA Cups; Liverpool’s final hurrah of domestic dominance before being consumed by Alex Ferguson’s Manchester United. By that time Houghton was an established international with World Cup pedigree.

In 1986 Jackie Charlton was hatching a plan to turn the Republic of Ireland from also-rans to a footballing powerhouse. It was simple, bring in people with tangential Irish heritage. Charlton watched Oxford’s Milk Cup Semi-Final 1st leg draw against Aston Villa and in the bar afterwards approached John Aldridge to join his ramshackle band.

Aldridge recommended his team mate Houghton, who qualified via his Irish grandmother, so Charlton picked up 2 for 1. Born in Glasgow, Houghton had already fallen out with the Scottish FA and was never likely to turn out for his home nation. He agreed to sign up to Charlton’s plan and made debut was against Wales, occupying the right side of a packed midfield.

Success was instant, his first international goal wrote his name into Irish footballing history as he headed the winner in the opening game of the 1988 European Championships against England.

Two years later, Houghton was Charlton’s first name on the teamsheet. He was selected for Italia ’90 and made his World Cup bow against the same England team he’d helped destroy in Stuttgart.

In blustery conditions and with the threatening tension of hooliganism hanging heavy in the air, Gary Lineker bundled in the opener for England. Ireland equalised through Kevin Sheedy in what was a sterile 1-1 draw.

Ireland’s campaign continued against Egypt with another draw, before taking the lead against the Netherlands with an apocalyptic long ball goal to Niall Quinn. Having drawn all three games, Ireland qualified for the second round against Romania.

The Romanian game ended 0-0 and went to penalties. Houghton scored the second one, before David O’Leary stepped up and put Ireland through to the quarter-finals where they faced hosts Italy in Rome. Finally, Ireland succumbed to a Toto Schillachi goal. Ireland had scored 2 goals, won no games, but returned as heroes.

In what became an international career lasting 11 years and 73 games, Houghton established himself for club and country and was selected for the World Cup in the USA four years later.

Ireland opened their 1994 campaign where they’d left the tournament four years earlier; against Italy. Playing in the adapted Giants’ Stadium in New York in front of 75,000 fans, the tie was ladled with significance as New York had long been at the centre of a tussle between Irish and Italian immigrants.

Rationally, though, it was generally accepted that with an ageing squad and tough games against Mexico and Norway to come, the Irish wouldn’t make it out of their group. Houghton’s own powers were on the slide and his starting position was under threat from Jason McAteer.

Charlton opted for experience and discipline and Houghton was selected to start. In the 11th minute the ball ran loose 25 yards out, Houghton chased it like an eager puppy. Rather than lay it off to Steve Staunton, he wrapped his boot around the ball sending a looping shot over the head of Walter Zenga and into the net. Houghton’s momentum and delirious celebration saw him bouncing across the field, doing an ill-advised forward roll before being smothered by his team mates. Against all odds, the Irish held out and secured a famous 1-0 win and once again Houghton’s name appeared on the scoresheet.

The win was the highlight of what was otherwise a difficult tournament. The heat was sweltering and Jack Charlton slowly lost his focus first complaining about the sun and then playing up to the cultish notoriety that had built around him and his team. Even though they sneaked through after being out-performed by Mexico and Norway, they were eventually put out of their misery by the Dutch in Orlando.

Houghton nearly sneaked a third World Cup, falling at the last qualifying hurdle in his final appearance against Belgium in a play-off for the ’98 final in France. By this time he was beginning to wind his career down with spells as Crystal Palace and Aston Villa, but not before winning another  League Cup in 1994.

Houghton’s whole career was characterised by his under-stated manner and his over-whelming success. For club and country there is an edible mark made from his contribution, the product of his attitude and work rate. A true Oxford legend.