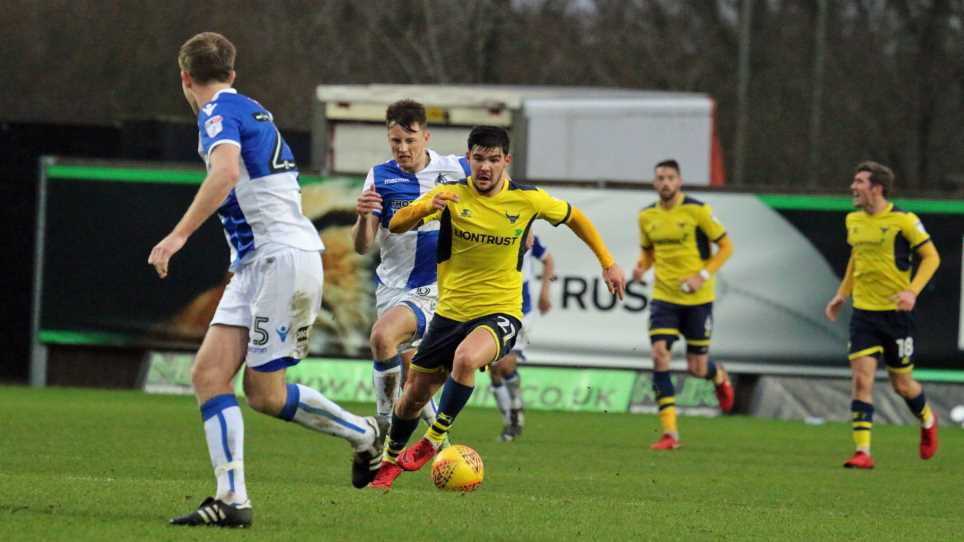 Oxford United 1 Bristol Rovers 2
There is a very tangible gloom descending over the club at the moment. The highs of Charlton were more than mirrored by the lows of Bristol Rovers.

I don’t think the performance was as bad as most suggested. There seemed to be more energy and movement, and a willingness to move the ball around, but having scored so early, we slowly lost our way.

This seemed to be down to experience and leadership. To score so early is a shock, the prospect of defending for 90 minutes probably seemed daunting, as is the idea of taking a risk to go for another goal. We were lost in between two mindsets, and where we often think of a football team as being a single unit, you’re actually faced with eleven people trying agree, in real-time, what to do with a situation they were not prepared for. In most games, the opening stages are about establishing a hierarchy, a pattern or platform from which you can build, very rarely do you expect goals.

Once you’re through the opening 20 minutes or so, the game tends to set down to a pattern, players stop thinking and start responding. In the last 20 minutes, the tactical options narrow further – you’re chasing the game, or defending a lead, sometimes the game is all but over. With more experience the team should have decided that the early goal was a bonus but carried on as if it hadn’t happened. One of the signs of a good team is their relentlessness, a complete disregard for the score.

Bristol Rovers are a difficult team for us to face at home. We often regress to the idea of voodoos or magic to explain difficult opponents, but I think it’s a combination of factors.

A short blast down the M4, Rovers will always bring large numbers to the Kassam, they are grouped together and the banking makes them look larger than they are. In addition, there’s the away mindset, there is, effectively little to lose. This is just one big day out, winning is just the icing on the cake, not the cake itself. And so, any encouragement is amplified ten-fold, players are less likely to fear failure, they take more chances, they get more rewards.

All of this is bundled up in the leadership issue, we don’t lack for talent in the team. But you do need enough players to know what to do when a plan is knocked off course, in this case, ironically, by scoring a goal. Instead, as soon as we drifted into unknown territory, we looked increasingly lost.

Rotherham 3 Oxford United 1
Even without the gloom, it would have been hard to envisage us winning at Rotherham. The only lingering hope was some sort of reverse pyschology that we would probably go and beat them because that’s just the sort of thing we’d do.

The idea that Derek Fazackerley will somehow fix the issues he inherited, implies that Pep Clotet was the sole problem, which he wasn’t. He didn’t help himself in some cases, but he faced similar problems to the ones Michael Appleton did after we got promoted.


What I think we’re seeing, is a reflection of the club’s current strategic challenge. Take Rotherham, they have the infrastructure to invest in players that will see them push towards the top of League 1, perhaps above. They are surrounded by teams in a similar situation; Wigan, Blackburn, Charlton, Portsmouth. We are currently performing fairly close to the highest level our infrastructure will allow. Darryl Eales’ is sometimes criticsed for losing interest in the club, but I think it’s more that he can only fund the club for so long before he needs help. If we are going to progress, the funding needs to grow, often exponentially. I have a massive amount of sympathy for him, he’s invested heavily, and his only reward is to invest even more.

As a result, we can compete sometimes in this division, but not all the time, and you can see that in our results. What’s worse, is that this year League 1 has so many teams in the mould of Rotherham. There is a relentless procession of decent teams with the ability to push towards the top of the division. It’s not so much that we’re going backwards, its more that too many others are going forwards at a faster rate. Week after week, while we’re trying to fix issues like the manager, limited striking options, a ponderous defence, another team comes along.

People question why John Mousinho still holds down a place in the team and why Charlie Raglan was sent out to Port Vale on loan. I think it’s about needing experience to steady the ship. If we’d gone with Raglan and Dickie, chosen by fans because, mostly, they’re not Mousinho and Martin, we’d have had a centre-back pairing with one player with little experience and another with little fitness. I believe the hope is that Mousinho is the best hope to steady things.

Relegation seems very unlikely; our poor form alone will not cause that, we would need several other teams to go on winning runs they show no sign of having. If you think we’re bad, those below are, by definition, worse. We can’t switch off, of course, but we can look at the remaining games as pre-season games for next year. It seemed to work for Shrewsbury last year.