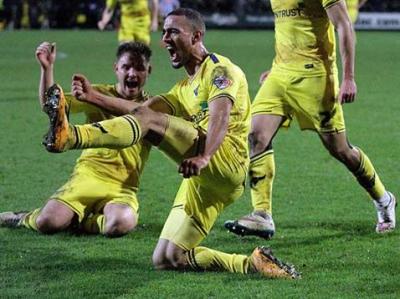 I don’t look at the tables much, basically, I know the ‘zone’ we’re in – promotion, play-off, mid-table or relegation, I look at the gap between us and being out of that zone, and that’s it. So, I know that we’re in the promotion zone, I know the other teams in our zone and I know that we are four points ahead of not being in that zone. I’m largely oblivious of what’s happening beyond those narrow boundaries.

I was looking at our fixtures for January – Notts County, Swansea, Millwall, Bristol Rovers, Portsmouth, Northampton, and I thought they looked tricky. We could conceivably lose the two cup games. There would be no shame in that, but it wouldn’t be good for our psyche if coupled with moderate league form. The league games are something else; Bristol Rovers in 5th, Portsmouth in 4th, Northampton in 2nd. That’s a tough run that gets tougher and we can’t afford to just write them off like we might the cup games. I started to worry; January is intense; cup games, a Sunday, Thursday, Saturday schedule, the transfer window and the pressure of keeping up a promotion charge; it could conceivably become very uncomfortable, and I’m not just talking about a seasonal cold snap.

It’s wouldn’t be quite the post-Christmas slump some have predicted, it’s more a product of how the fixtures have fallen. If you look at our last 10 games this season any losses we might suffer this month can be clawed back in the spring. But, superficially poor January form could mean we’re in the play-off zone by February and that’s when doubts creep in. It’s just not healthy for a club so aware of its ability to snatch failure from the jaws of success to lose momentum,  particularly just after Christmas. It just fits the preconceived narrative.

So, Notts County – both the result and the nature of it – has gained huge significance. Normally, an away draw would have been fine, but in a month when every point will count, three points from the first game gives us a buffer we desperately need. I’m reasonably confident we can take points in both our home games; if so, then Portsmouth could, effectively, become a ‘free’ game because any points needed at Fratton Park may have already been won at Meadow Lane.

January, for me, is all about keeping things together, no one should be expecting us to sale through it undefeated but damage limitation is a minimum requirement. The Notts County result might just be the most important three points we’ll gain all year.