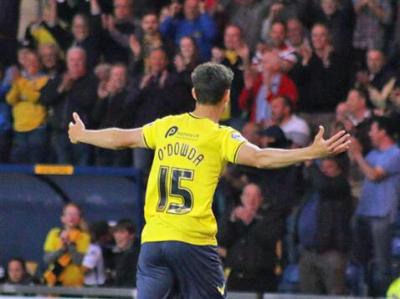 There’s a benign quality about early season mid-week football. Unlike later in the season, the mood is 90% blind optimism, 10% grim pragmatism. There’s a freshness, everyone looks a bit more tanned and relaxed, like they’re enjoying rather than fighting life. The crowd has a few more children who are still on their holidays, one or two casuals curious as to what happens in these parts, and even the odd foreign student wanting the experience of watching English football.
We’ve had many good nights like these; beating Bristol Rovers and Bournemouth in the League Cup, Swindon in the JPT, league wins over St Albans and Cambridge. Nights where all is right with the world.
This was like that, but a bit more so. We looked comfortable enough from the word go, knocking the ball between midfield and attack, little flicks and back heels. But with the ball running true and the weather so mild, we needed pace and creativity. Nobody was giving us the urgency to get on and win the game. Pat Hoban is a battering ram and we may still need him in the trenches in the coming months, but this wasn’t his kind of game.
County looked OK, but lacked the anger of a club scorned by their relegation, one that wants to dominate teams and win back their rightful place in a higher division. Beyond one brilliant set-piece – and their goal – they looked passive.
The injection of pace and enthusiasm that the game needed came from Callum O’Dowda. It’s rare that you see a player materially turn a game on its head the moment he comes on. Not just his goal, but the way he went about his work. That set the tone for others to follow.
What resulted after was easily Michael Appleton’s best performance at home, and one of the best we’ve seen since we came back into the League. Some games – cup games, derbies – generate their own energy, Chris Wilder was a master at channelling that. But this was one of those games which could have generated a marshmallow atmosphere. Historically, we have become consumed in this ennui, but this was very different. A victory not of angst and relief, but a pure ode to joy.