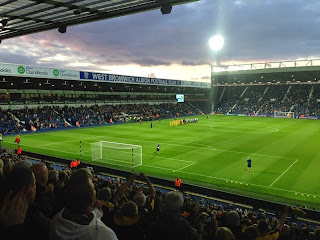 I’ve never seen a Premier League game. I’ve seen top flight football before it was re-branded in 1992 but nothing in the new era. One of the appeals of our League Cup tie at West Brom was the prospect of visiting a Premier League ground, and one I hadn’t been to before.

I still think there’s something slightly magical, when you get to a big stadium, about that first glance from under the stand out onto a pitch framed with the banks of unoccupied seats. You don’t really get that in the lower leagues; usually the stands are too small, or in our case, they don’t exist at all.

I came to realise that it’s been a decade since I was in a top flight stadium to see Oxford; I missed the West Ham game four years ago and before that it was our 2003 FA Cup tie at Highbury. We really have fallen far.

It’s clear from first contact that The Hawthorns drips with money; other peoples’ money, Sky money, dirty money, who knows? Obviously not in the absurd scheme of Premier League things, but in terms of the normal world, the riches are obvious. The pitch is immaculate; a constant of green from end to end and corner to corner. The seats are uniform and shining, not faded by a decade of exposure to sunlight like at the Kassam. Advertising animates, videos play out. The sound system is crisp. The floolights, gleaming white, tower above the stadium. Even under the stand, around the toilets and snack bar, the floor is wood laminate. With the height of the stands with the corners filled-in, the stadium is complete and enclosed; a theatre with the world shut out. I can see it would be fun to watch football here on a regular basis. As ‘real’ as things might be in the lower leagues; you might also describe them as ‘a bit shit’.

The game gets going and quickly falls into a pattern; we’re organised, but they pass the ball crisply and with pace. It’s the pace that’s the difference. Everything moves a bit quicker. Before the game there’s a montage of nauseating video clips played on the big screen; positioned awkwardly so that only about 20% of the stadium can see it properly. Baggies fans give their predictions for ‘fan cam’ – 4-0, 5-0 – they disrespectfully ‘give all due respect’, but, they say, the Premier League class with surely tell. They are filmed self-consciously doing the ‘Baggies Boing’ like they’re being threatened just off-camera by separatists from a terrorist operation.

But, we hold them, generally untroubled by both pace and style. There’s an inevitability, a pattern, emerging. We will compete as equals, but once minds and legs begin to tire, they will slowly euthanase us like a vet putting to sleep a suffering calf. That’s how this plan will play out.

That’s the Premier League philosophy; the quality will ooze out, ejaculating all over us, consuming and suffocating to the point extinction. Us, other sports, other forms of entertainment, football will consume us all in quality. It’s not exciting; it’s like a piece of precision engineering which mesmerises you with its intricate moving parts, even though it doesn’t really serve any real purpose.

On the touchline, is Alan Irvine, one of many Premier League managers whose agenda is one of survival. His own and his team’s. He’s not paid to be exciting. Do the right things most of the time and they will survive another year to be fed by the Sky money machine like a zoo keeper rewarding a performing seal with a piece of fish. Being average amongst the elite is his target, staying the right side of average is more important than taking risks and winning games.

We concede, but we don’t lie down. Key moments pass, when you might expect us to lose concentration and crumble. Just before half-time and then just after. An hour ticks by and we pass the point of ‘not disgracing ourselves’. The massed bank of Oxford fans begin to get frustrated that we’re not taking the game on, not taking risks.

And then, we start taking them on and they don’t know what to do. We throw a punch and they flinch. We throw another and they seem to rock. Most importantly, they don’t hit back. The tired minds and legs don’t open up the chasm in class; as a result, they have no additional gear, no plan B, we’re not partaking in their set piece ballet, we take them on. They have no response; we were supposed to be long dead by this point.

While they flick frantically through their scripts trying to re-find their place and regain their composure; we attack again, where does it say that? And again. Eventually, a breakthrough, Hoskins nods down and Hylton bundles in. Delirium.

Then, each pass seems to bind the team together more; Appletonians, Wilderians, they’re beginning to trust each other, they’re working together. The fans too are bonding to this team; Riley – he’s one of ours now, Collins, him too, Hylton, Brown, Morris. We’re starting to get them as a team. The confidence is transferred into a forward motion and we’re no longer holding them, we’re attacking them; relentlessly.

Into extra time; during the break lactic acid fills the legs, they can feel like lead and we’re vulnerable again. But, we’re out of our corner at lightning speed, throwing punches putting them in trouble. This is beyond survival, we’re outplaying them. Are the West Brom fans worried? Who knows? You can’t hear anything beyond the bedlam of the away end. They should be.

But, we can’t break through and they begin to regain composure. Composure but still no threat. Now we’re tiring. Brown overstretches a challenge and takes a second yellow card. It matters not; we’re deep into the epic now. The outcome, whatever it is, will see us victorious.

And finally penalties; on and on it goes, slugging away. Like a city under siege, we’re running out of men to fight, soon it’ll be just the children and cripples left to defend out honour. The old warrior, leaden legged Jake Wright, steps up, he’s never scored for us before and he doesn’t now; he swings a boot and the keeper parries.

One thought on “The glory in defeat”