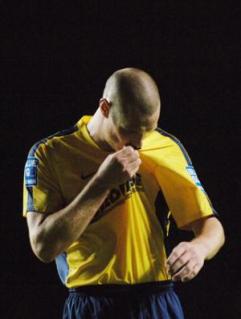 So, that’s that then. James Constable, Oxford United’s most important player since Joey Beauchamp, has gone.  Just think, we may not see his likes again for a decade or more. I thought that about us winning a major trophy – that it could be years before we lifted another piece of proper silverware – and that was 28 years ago. Perhaps we’ll never see his likes again.

In the end it was both predictable and unpredictable. Unpredictable because like all institutions you grow to expect them to be around forever. Predictable because it had to happen at some point; the longer he stayed, the older he got, the less goals he scored, the more likely he was to leave. His last contract was signed when we were on the up, he was expected to deliver 20+ goals a season in the Football League and he didn’t. That adjustment of his value when his contract was up was always going to be uncomfortable. Nobody wants it to end like this, but at the same time it was always likely to.

The era of Wembley, Wilder and Beano slowly grinds to a halt. A golden period hermetically sealed and buried only to be opened during dark and barren days. Late night trawls around YouTube, a DVD found in a box of memorabilia in the loft. It was always going to happen, but it’s still sad that the day has come, especially with those dreams of Championship football and goalscoring records left unfulfilled. Perhaps the best stories are those where you’re left wanting a little bit more.

I have always been a fan of Chris Wilder, the reason is that he guided us into a golden period and you have to treasure those while you can. James Constable was his man on the pitch. Next year it will be the fortieth anniversary of me first going to The Manor, I’ve experienced three golden periods in that time – the mid-80s – John Aldridge, the mid-90s – Joey Beauchamp and 2009-2014; James Constable. For clubs like us, they don’t come around very often; you need to recognise when you’re in one, and look after it best you can.

Those looking for a replacement for Constable are likely to be disappointed. It’s not just his goals that made him who he was; it was the timing of his arrival, what he lead us to, how he carried himself. It is not just Constable that makes him a legend; it’s the period in which he was with us. We’re in a different time now, if you go looking for a hero you’ll come up disappointed, they will appear, if you’re lucky, from somewhere least expected.

From a reputation perspective, the club will always lose out in these situations. Most fans have a romantic view of players, and they expect clubs to act in the same irrational cavalier way they do. There are some who would have happily released every player from the squad at the end of last season. Now, losing Beano is like ripping your heart out. Had the club fired the squad after the Northampton game and then tried to reinstate them in the same way, they would have been considered beyond a joke. If they had offered Constable £100k a year to score two more goals people would have laughed them out of the county. But, you can almost guarantee that there will be calls to ‘get Beano back’ for the next 3-5 years as there was with Beauchamp, Paul Powell, Jim Smith, and others in the past.

But the club needs to look pragmatically. There is plenty of speculation around what Constable’s salary was and what he was offered. It seems bizarre that salaries appear to be such common knowledge. I barely know the salary of members of my team at work and yet it seems that everyone knows what Beano wanted and was offered. Was it streamed live on the Yellow Player? Or maybe people pick up fragments of various rumours and lies until they eventually coagulate into supposed facts.

Claims and counter-claims have already flown around; Beano is the wounded bird, he loves the club and is devastated to leave. He’s always been the great servant rather than the most bankable asset and I genuinely believe he saw the club beyond the immediate issue of money. Less helpfully, Richard Hill at Eastleigh said that Constable was looking for a ‘fair deal’ which has sent the cat amongst the pigeons. Fairness is like the truth; there are always at least three versions of it – your version, my version and the actual version.

One figure suggests that the club offered him what they believed to be a fair figure; £800 per week. Football wages are always expressed as a ‘per week’ figure which makes them sound huge, but that’s about £40,000 a year; a typical salary for a fairly experienced professional working for a small company.

Eastleigh, it’s alleged, have offered him more than twice that. Which presumably they consider to be fair and no doubt James Constable would do too. But this is a frankly ridiculous amount of money for any player at that level of football. It’s difficult to know whether to back the fairness of a realistic and down to earth club, or the fairness of one that is ambitious to the point of wrecklessness. We’d love a club to be ambitious and realistic, but that’s rarely possible.

What does seem true is that Constable has made his decision for pragmatic reasons. For all the talk of loving the club, this is not a football decision, it’s a career decision. Eastleigh have offered him whatever it is they have offered him to play in front of two men and a dog. He should do well  back in the Conference, but it seems a decision in which he recognises that at some point playing football with your heart has to give way to sustaining your career using your head.

The reality is that Constable’s market value has fallen from the heady days when Swindon and Bristol Rovers were offering him silly money. He has even fallen within the club from the 20 goals a year striker to 15 goals. He was never likely to reverse that trend as he approached 30.

In February, after Constable scored against Bristol Rovers putting him 4 short of the record, I tweeted a scenario where he would break the record on the last game of the season to send us up and Chris Wilder and Northampton down. Someone replied and said they expected Beano to have passed the record long before then. Nearly four months on and he still fell two short, it isn’t so much that the club didn’t allow him the opportunity to break the record, it’s just that he wasn’t good enough to do it.

The romantics amongst us will mourn the fact that Beano didn’t become the leading goalscorer and that we were never there to give him the ovation he deserved. With a bottomless pool of money, yes the club might have paid whatever he wanted just to push him over the line, but there is no bottomless pit.

The club has responded responsibly in terms of its long term stability and its future prospects, whereas Constable has acted responsibly in terms of the long term security of himself, his girlfriend and daughter. Eastleigh have acted responsibility in terms of the pursuit of whatever dream it is they’re pursuing; even if it is foolhardy and unsustainable. Somewhere in the middle of that is a compromise; Oxford have compromised by losing the player, Eastleigh have compromised their future stability and Constable has compromised his status as a league player. We are the ones who lose out because we’re dreamers who can’t compromise. Sadly, while we might want to look for one, sometimes nobody is at fault.

One thought on “Farewell Beano, and farewell the golden age”