Dave Kitson’s first goal for the club on Saturday helped to secure a 2-2 draw with Cheltenham. It came after I’d watched an interview with him on Yellow Player which revealed a dark secret. Dave Kitson is an intelligent footballer. 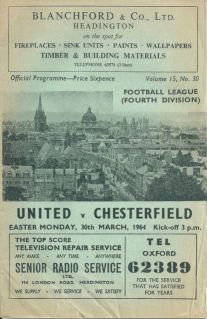 Paul Elliot has sustained a long media career as the former football star who can comment on virtually anything; David Beckham playing overseas because he once played for Pisa, Jose Mourinho because he once played for Chelsea, and his specialist subject; racism, because he is black. Being a campaigner, he’s happy to do what all campaigners do; use micro-examples to ‘prove’ macro issues. An isolated incident of racism becomes an example of endemic discrimination in the game. This ignores the self-evident fact that a vast majority of people are not racists. In fact, they’re not even anti-racists, race as a, political concept, does not invade most peoples’ consciousness. Which is exactly how it should be.

As an aside, Elliot recently had to resign from his roles at the FA after a text he sent to Richard Rufus containing the word ‘nigger’ was made public by Rufus. This was a particularly venal act by Rufus. Apparently, according to some FA suit, this wasn’t acceptable regardless of the context. This is grossly unfair on Elliot specifically. It seems odd that Elliot was using it as a racist term given his own ethnicity, more likely he was using it in the way you or I might use the word ‘mate’. Rufus knew what he was doing, though. If you remove context from interpreting someone’s comments then we might as well walk around on mute.

Anyway, this isn’t why I don’t like Paul Elliot, it is because he is a self-styled ‘intelligent’ footballer. Granted, his career was cut short with injury and he had to find something to do. I doubt that it was a cynically planned move, but in the new Premier League era, there was a gap in the market for an articulate, good looking, black ex-footballer who was prepared to navigate football politics. Brendon Batson, a predecessor of Elliot, was of a similar profile, but he was from a different era.

No, my problem with Elliot is that to prove his intelligence, he insists on using melee mouthed language. If you ask Paul Elliot a question, he doesn’t say ‘yes’ he says ‘indubitably’. It’s like in his head there’s a thesaurus working overtime to create a simple sentence in the most complicated way possible so; “Really you’d expect the left-back to be tracking back there” becomes…

“In actuality one would be presuppositioning that the mirrored position to the right resistance flanker would be regressing to his default situ.”

Football is styled as a working-man’s game, even in the polished Premier League world, the rhetoric is all about football being all consuming and the meaning of life. The implication is that fans have nothing else worthy in their lives. There is no room for the polymath or even a reasonably rounded human being with more than one interest in life. I mean, you don’t see adverts of fans sitting reading the paper while the football meanders on in the background. This is far more realistic than everyone sitting on the edge of their seats eating burgers and cheering at throw-ins.

Graham Le Saux and Pat Nevin are both ‘intelligent’ footballers who have, for their sins of reading the Guardian and speaking with a nice voice, been accused of being at best outsiders, at worst, gay. David James occasionally slips into Elliot-esque pretentiousness, but has refined the role so that it doesn’t grate quite so much. Frank Lampard is privately educated with an A* GCSE in Latin and presumably would have taken that education further had he not decided to play football. He hides his intelligence brilliantly behind thick layers of media training designed to never say anything interesting.

There are others; Clark Carlisle was on Countdown, which is considered the height of intelligence. A bit like our own Matt Murphy, who was considered to be a bit of a brainbox due to him previously working as a bank clerk. Carlisle, quite rightly, says that the stereotype of the stupid footballer is unfair. David Beckham, generally portrayed as a bit of a dimwit, doesn’t sustain his success on and off the pitch without having a degree of intelligence. It’s not like he’s Stephen Fry, but he knows what he’s doing and does it well. But it stands to reason that football has a broad spectrum of types – as illustrated in Woody and Nord.

I hadn’t expected Dave Kitson to be a hidden intellectual, well, not intellectual, but someone you think you could probably hold a reasonable conversation with. And probably not about him ‘buzzing about results’ or being a ‘top man’.

He’s clearly philosophical about his career – which is probably helped to some degree by the £10k a month back pay he’s getting from Portsmouth. He’s not the player he was in terms of pace, so he’s been able to change his game to suit.

This has a whole range of benefits – for one, he’s not going to demand centre stage; as a rule, you’ve got to be a bit of a bighead to want to play up front, but having players with more pace and fitness around him, he’s prepared to play his part to suit his strengths. He offers a good sounding board for those around him; not least James Constable who should be able to learn from Kitson’s recognition that he’s become a link-man rather than a goalscorer and still be useful to the team.

Above all, though, listening to Kitson gives me some sort of faith back that professional sportsmen are neither brainless Herbalife selling Nandos eating automatons, nor pseudo-intellectual pillocks. Some are reasonable, thinking people.

It could be that in Kitson we have another small piece in the new-era Oxford jigsaw puzzle. Lenagan, the measured business-like owner, Wilder a solid reliable manager, and Kitson a measured intelligent player. This might not be quite as thrilling as supporting a club which spends wildly with a manager who spends as much time in the stands as in the dugout. But then, we’re Oxford, not Swindon.