Skip to content
My childhood ended when I realised that our kit wasn’t our own, it was just a generic template with a badge on it. I was 37. This revelation means it’s far easier to predict what next seasons’ kit will look like. By a process of elimination, it may well look like this. 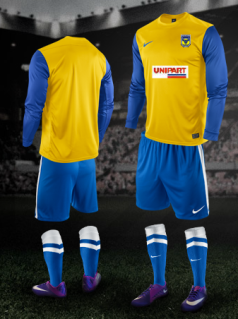 It’s not often that this blog can provide a scoop, but I can exclusively reveal our playing kit for 2013/14.
Probably.
Only when we changed our kit supplier in 2009 did I realise that kits weren’t exclusively designed for your club. Sure, I realised that manufacturers had a common style, but it never dawned on me that professional clubs simply picked their design from a catalogue and whacked a badge and sponsor on it. That’s what park teams did.
The dawning came when Nike replaced Carlotti as our manufacturer. Firstly, when it was announced all the talk was of the distributors Just Sport and secondly; this was Nike. I somehow couldn’t envisage Kelvin Thomas and Chris Wilder walking around Beaverton talking to Nike design drones about fabric swatches.
It stands to reason, of course, companies like Nike can produce millions of these shirts and resell the design around the world. They’re not going to rely on the sales from the Oxford United club shop to make a profit from a single design.
So why is this the new kit? Well, there are some basic assumptions here, the first is that we’re staying with Just Sport. Their website has 12 different templates; broadly speaking most of them are either plain – as with this season, or striped, like 2010/11. Assuming that the club need to introduce something that’s sufficiently different, then we can discount all the plain shirts. Also, perhaps we can assume that the club will avoid another outcry by having a striped shirt. The shorts and socks are colours that go with the shirt in a design different to last  year. This is basically what you’re left with when you discount all the other options.
Just Sport have Adidas, Puma and Nike shirts in stock; and this is the only yellow and blue template that we haven’t used. There are a few yellow and black versions; this seasons shirt has a black swoosh, the other designs make this more obvious.

Admittedly, there might be some new templates in the offing; but of the four on this website, only this one is yellow and blue, or blue and yellow. A nice second strip, perhaps.

I quite like the version I’ve put together using Nike’s kit building thingy on their website. I have a soft spot for the lighter blue because it reminds me of the club I began supporting. The Unipart logo is just me kicking it old school, I don’t have an exclusive on our new sponsor.
Significantly, however, what happens in the future? It stands to reason that manufacturers want to cover a maximum number of teams in a minimum number of designs. Red and blue feature heavily, as does white and the striped combinations of Barcelona, Inter and AC Milan. The yellow options are combined with either with black or green, presumably a nod towards Brazil. By and large that’s it. There aren’t many other yellow and blue options, and it doesn’t seem likely that Nike will pull out the stops to preserve our traditions next year.

There’s no reason to believe that the club won’t continue to seek the most economical option when choosing their kit. Presumably Nike are competitive from a price perspective, and the quality is good. If we do stay with them, or the other Just Sport suppliers; we won’t have a yellow and blue option next year. Will the club have to consider moving to yellow and black just to give us options. There’s some historical precedent, of course, but it will jar with many.

An alternative is to switch manufacturers, there may be options available, there may even be the option to create a design that’s more specifically tailored for us. But, one this is for sure, the future of Oxford United playing in yellow and blue is far from certain.