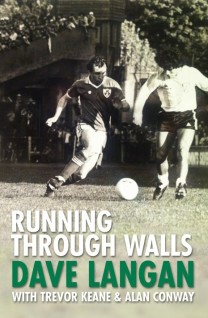 I have to confess that when David Langan appeared on Twitter with an autobiography in the offing my immediate reaction was that it was a proxy account run by his literary agent. From a man who is notoriously shy and quiet, not to mention down on his luck, Langan’s tweets flowed with a combination of generic footballing schtick (Brian Clough quotes, for example) and stuff about how much he loved his former clubs.

The book, Running Through Walls, came out in September. It spends quite a lot of time scratching around for a story, and it’s not until the last two chapters that it makes sense. The final chapter is handed over to one of Langan’s ghost writers Trevor Keane. He confesses that he’s not a professional writer, and that it took a while to persuade a publisher to take the manuscript on. DB Publishing, the book’s publisher, include in their stable; Doncaster Wembley 2008 and Macclesfield Town – The League Story so Far.

This explains some of the book’s structural oddities. Niche publishing tends to neglect costly luxuries of editing and proofing. When describing Langan’s knee injuries, the authors manage to exessively use the word ‘knee’ 14 times in 2 pages. Each chapter concludes with an extended testimonial from one of Langan’s former team mates or friends, which become repetitious and interrupt the flow of the book. A good editor would have tightened the story up considerably.

Langan’s Oxford career is dismissed in the blink of an eye. The 1984/85 season is whisked through in a couple of lines, even though Langan scored a pile driver past Pat Jennings against Arsenal and got the goal that clinched promotion. The highlight of his club career; the Milk Cup win, is pretty vague. He only played because of injury to Neil Slatter, who he inexplicably calls John. He forgot to invite his son to the game. And he also talks of the celebratory journey back to Oxford ‘up the M1’ when presumably he means the M40.

There is much on how Langan’s life fell apart spectacularly after leaving Oxford. But you feel there’s more to it than he lets on; he gambled, but not seriously, and he drank. He was depressed and down in the dumps, but you can’t tell whether he was actually depressed or just down in the dumps. He was divorced twice and estranged from his children, but we’re not give an insight into how that happened.

Some of the football stories lack punch, although that’s not unusual in this kind of autobiography. I’ve yet to read any story in any book about ‘a craic’ that makes me want to be there. You feel like the designated driver sitting in the corner nursing a coke while others have the most hilarious booze filled night ever.

The penultimate chapter is most telling. It is handed over to Langan’s mother, a god-fearing worry-wort. She tells us that all she’s proud of her children, illustrating their good behaviour by announcing that none of them ever robbed anything, which seems a pretty low bar to judge anyone.

But Langan’s mother grew up in pre-war Ireland; 70% of the population were farmers. Her frame of reference for teaching her children the life skills needed to deal with a harsh cynical world in Thatcherite England seems fairly narrow. ‘Not robbing’ is a pretty universal, but ultimately limited morale code. As a result, Langan seems ill-equipped to cope with the modern world.

As if to illustrate this, the big story the book tries to explode is Langan’s omission from 1988 European Championship squad. This is presented as an injustice. But, when he explains the events in the run up to the selection of the squad, you find yourself biting your fist and wanting to grab the 1987 Dave Langan to shake him out of his naivety.

Basically he was already a physical wreck (even before he got to Oxford) and was sent out on loan twice during the preceding year with little real success. Jack Charlton introduced a  calculated approach to Irish football, plundering anyone with a vague link to the country. His innovation was a functional long ball game that suited the skills he had at his disposal. Langan was a victim of Charlton’s modernisation. It is (and always was) plainly obvious that Charlton was there to win. There is no loyalty in football and, 23 years later, Langan still seems unable to see that.

Basically, the modern world wasn’t built for people like David Langan. There is a cloying dewy eyed ‘oirish-ness’ about the book. Modern day Irish are keen to shed this, despite the media’s insistence in painting them as a happy-go-lucky band of diddly-diddly harmless drunkards. Langan is bewildered by this drive for change and hankers for something safer and more certain. In the middle class idyll, he should be enjoying his retirement on the after-dinner speaking circuit, but his skills and health allow him to do jobs that are now assigned to willing and healthy immigrants for a fraction of the cost. Quite how he is supposed to survive after he’s milked the only asset he has – the modest Langan legend – god only knows.

You feel helpless reading Langan’s plight, but at the same time you can see exactly how it has happened to him. Its not a remarkable book by any stretch, but I hope he sells shedloads none the less.