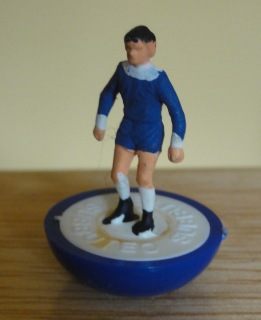 To be honest, I’m not very good at tactics. I couldn’t, with any confidence, tell you what ‘running the channels’ means and due to playing far too much Subbuteo as a child, I couldn’t spot an in-game formation change. At least with table football, if you want to pack the midfield, you just pick your player up by the head and put him where you want him.

I do know, however, that a game has four distinct phases. The first twenty minutes is a jockeying for position; all brawn and little brain, establishing who is the aggressor. Who will hit who and how hard. Once that is establish, we move into a more considered phase. The initial adrenalin rush subsides and brains take over. The team who have established themselves as the alpha male sets the tone and rhythm, the other team works around that.

After half-time, manager’s adjust their strategy, and players follow it, albeit briefly. You’ll see teams attacking down the flanks or pressing in numbers, evidently following their boss’ command. Eventually, the impact of the tactical change reduces. This gets you to about 70 minutes, at which point the game actually starts. Players are mentally and physically tired. The aggressors are less aggressive, the manager’s tactics are less clear than they were over a cup of tea in the changing room and the objective – chasing or defending a victory – is crystal clear. The game takes the look of a park or school game.

On Saturday, like Tuesday, there was little aggression in the first phase of the game. There didn’t appear to be any real plan to win the game, it was more a case of turning up to see what happened. Gillingham, full of the confidence of a top of the table team, kept coming. We really lacked any discernible attacking tactic.

In the second half there was the slow emergence of a team that could compete. Gillingham weren’t Barcelona and we weren’t Wolvecote Primary School 2nd XI. As the game entered the final stage, we seemed to be getting back to something resembling normal. We attacked like a home team, they seemed quite content, as the away team often is, to secure a point.

Throughout this awakening, the crowd remained patient. The consensus that ‘most people’ want Chris Wilder sacked is not evident at the game. In fact, it’s quite the opposite. If the bad run has culled some of the crowd, then it appears the ones not turning up are those who spit blood on internet forums. What remains is a crowd that is more thoughtful and considerate of our plight. More accepting of our need to heal.

A clean sheet against the top team in the division, who hadn’t dropped a point on the road is a big tick in the box. Ryan Clarke will obviously take confidence from his own performance. Mullins looks like a genuine first choice defender rather than a makeweight. Chapman, Foster-Caskey and Heslop is a decent midfield, although perhaps not one you’d rely on all season. For now it works, and hopefully it’ll continue to do so while Whing, Leven and Cox regain fitness.

There is still a question mark up front. Smalley looks the most effective striker at the moment; or at least, he seems the one with the mental strength to maintain a performance in a difficult situation. Craddock seems similarly able to perform under pressure. I suspect Wilder’s preference for Craddock over Constable is simply down to form.

This result amounts to a reconstruction of our ‘self’. An image we all carry to protect ourselves from the harsher realities of life. If it takes a knock, like ours has done recently, we look at ourselves differently, we become self-conscious and don’t function properly. We are rediscovering ourselves as a club that can compete and be successful rather than a victim to be bullied. Not a full recovery, but another step in the right direction.