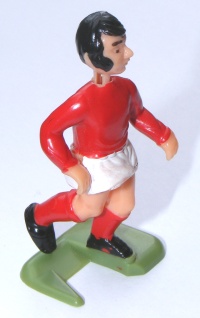 Everyone hates Swindon. It’s not just us. If you ask anyone to name a dank, soulless British town then people say Slough. Or Swindon. It is neither a quaint northern relic of our industrial past, a gleaming economic powerhouse, a seat of learning or innovation, or a monument to our establishment. It represents, if anything at all, the rigmarole of everyday life where nothing much happens.

Paolo DiCanio is very Italian. Italy is, in one sense, stylish, engaging and beautiful. But it is also morally and economically corrupted. In one sense we envy its ability to achieve the spectacular – Ferrari, Armani, Da Vinci – but we’re British and we like steadfastness so the erratic behaviour of Italy and Italians gets up our noses. Paolo Di Canio gets up our noses.

Di Canio and Swindon seem like such an unlikely match, but they are perfect for each other because they are so easy to dislike. It is, of course, unfair to tar every Swindonian and every Italian with the same brush, but it remains a fact that many people expressly don’t like the town or the man.

Our manager is dour and pragmatic; he talks about budgets and hard work. He is very British. People like Oxford; it stands for something that we, as a country, can be proud of; learning, innovation, saving lives, improving lives. Great things are achieved in Oxford. It is extraordinary, you ask someone to name a British town that represents great learning, people will say Cambridge. Or Oxford. We are the perfect counterpoint to Swindon.

I suspect that Di Canio and Swindon rather like their reputation, after all, if you can’t be loved, being hated is better than being ignored. The derby is a quintessential good versus bad story. It’s context; whether it be a cup final or Johnstone’s Paint Trophy has an endearing quality about it.

Last night’s derby was a builder; I’d set off early because of parking anxiety. But I parked easily, more easily than a league game. I was in the ground 30 minutes before kick-off. Swindon fans, who had presumably been escorted in, were loud, raucous and in plentiful number. We were nowhere to be seen. I thought I’d fallen into the trap of believing the hype. Nobody was really going to turn up to a Johnstone’s Paint Trophy 1st Round tie, Swindon or not.

Then suddenly, 15 minutes before kick-off the car park – already full of cars – filled with people. Coming from the direction of The Priory; it seemed the entire Oxford crowd were arriving together. They swarmed around the cars like a river. Pausing briefly to exchange insults with the Swindon fans in the ground. Then they poured into the ground. I’ve never seen anything like it. Suddenly, bang on time, the noise was turned on and the place thundered into life.

The game was loud and energetic, but there wasn’t a cramp-inducing tightness in the muscles or the gnawing stomach grumbles. It wasn’t like the game last year. It was more like one of those early season League Cup games we used to land periodically against mid-ranking Premier League teams. A big game we wanted to win, but weren’t that fearful of losing.

As the minutes ticked by and penalties seemed to only logical way of getting us home at a reasonable hour, I’d pretty much settled on the idea that the draw was the right result. That way, regardless of the penalties, nobody could definitively make much of what the result meant in the great irresolvable debate of which club rules supreme.

I was enjoying the game, and the atmosphere, but drifted in and out of the specifics. In my head I was filing it away under ‘unremarkable, but fun’. The time ticked by towards the 90th minute and suddenly, from nowhere, James Constable was clear. He’d been OK, again, a decent target man, but not full of movement and threat. He could have taken it on, probably would have if his confidence had been with him. But he squared it, and there was Alfie Potter.

You couldn’t mistake the similarity to Potter’s goal at Wembley, just with Constable playing the Deering role. Wilder hooned down the touchline, exactly as he did at Wembley, stopping just short of giving himself wedgey and grass burns with an ill advised slide on the turf.

With all the talk of Wilder going to Coventry, winning the derby, in the last minute with a goal from two players who have been with him pretty much throughout, who he’s nurtured, protected, defended and battled for seems almost too perfect.

There may be more to come from him, this might be it, who knows? But perhaps this was a result for Chris Wilder. A testimonial to his achievements with Oxford. It means nothing in the great scheme of things; but it was a bloody fun load of nothing.

One thought on “That one’s for Chris Wilder”