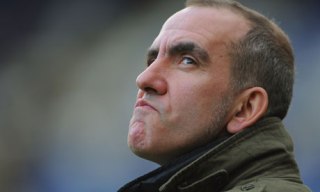 Dear Swindon Town
Firstly, sorry for writing to you en masse like this but I feel it’s time we talked.

Let’s be honest, it’s been a good season for both of us. You are set to win the league and we are continuing our steady recovery from a decade of neglect with real potential for clinching a play-off spot. I guess we had hoped to be higher, but objectively, we’re pretty happy with where we are at the moment. Something you learn when you’re in the doldrums is to keep life in perspective. Who knows, this time next year we could both be in League 1? Wouldn’t that be nice?

Now, I don’t have a massive problem with you to be honest. For example, I quite like your manager. I don’t agree with his politics, but I’m assuming that he’s not actively ethnic cleansing anyone at the moment and a man is more complex than his ideological persuasion. He’s charismatic and funny. I like listening to his interviews. He plays a great villain with his sun glasses and histrionics and all that scarf waving.

I have to say, I feel uncomfortable addressing you as one, like you’re all the same. You’re not all bad. The Washbag, the Swindon blog, has got to be amongst the best on the web. It’s coverage of the derby was first class; intelligently partisan. You should read it, support it and encourage its progress.

And congratulations on Matt Ritchie, by the way. He’s clearly quite a good player. His performance at the Kassam was completely overshadowed by his assault on our ball boy, of course. But he was magnanimous enough to apologise after the final whistle and it was all a bit in the heat of the moment.

We’re pleased to have kept James Constable, he means a lot to us. Be honest, you wanted him. You don’t make three bids and spout lies and nonsense in the press, like your manager did, if you don’t want a player. He didn’t want to go. Because if he wanted to go, he’d have gone. Footballers and clubs are very good at making deals happen if they want them to. And it didn’t happen. If you’re right, however, and Di Canio did pull out due to Constable’s hesitation, you might want to ask why your manager is prepared to risk your club’s money on whimsical big money bids. Believe me, that’s just not healthy; the man has a rampant ego, you might want to watch that. Please stop pretending that you didn’t want Constable and that he wanted to come. It’s just not doing you any good.

And while we’re at it, let’s just keep the Lee Holmes thing in perspective. This isn’t Mo Johnston breaching a century-old religious divide moving from Celtic to Rangers. We signed Lee briefly on loan. He did pretty well for us, including two lovely crosses for the goals in the derby. He has decided to come to you. Surely you don’t believe that he’s moved for anything other than business reasons. He might help you win the title but, you were already going to win that anyway. He hasn’t moved to spite us, he’s moved so that he can gad around as a ‘title winner’ in May and, I suspect, because Southampton got a better financial deal out of your lot. So you’re spending more money on a player you don’t need. I don’t know, perhaps you can afford it, but why are you stockpiling expensive players?

We’ll ignore Mehdi Kerrouche, whose move has been largely inconsequential. He didn’t really ‘do it’ for us, and I suspect he’ll now rot in the reserve for you. No gain there.

Now, let’s deal with one of those portentous phrases you keep using; ‘Forever in our shadow’. Am I right to assume this is some sort of analogy to illustrate how we’re supposedly cowering from your luminous glory? Let’s be honest, neither of us can really claim any great glory in our recent history. We enjoy our clubs and what they stand for, and we enjoy our successes when they happen. But your glories are not so bright as to cast a significant shadow over anyone.

Sorry, you’re just not that important. There’s nothing for us to be jealous of. In two years time, no one will remember your League 2 title. I’m sorry, they won’t. Don’t get me wrong, I would love for us to win a title, that will be very important to me and my club. But I don’t expect it to cast a shadow over anyone else, including you. And just because we’re not winning the title doesn’t mean I’m bothered that you are. Your self importance is a bit bewildering and somewhat overstated. You just don’t cast a shadow over us, or anyone (nor do we, but then we don’t claim to). I go to games all the time and, honestly, nobody is talking about you. We’re too busy talking about us. Which is just how it should be.

And then there’s this whole ‘our cup final’ thing about the actual derby games. It seems to me that you make a a lot of noise about everything to do with Oxford and Swindon except the actual games. I guess that’s because we won both of them this season. It’s still quite odd that you don’t seem to even acknowledge them. I have to say I enjoyed the games immensely this year, particularly the home game, which was epic in every sense from the setting to the nature of our win. And, of course, you played your part magnificently. You surely have to recognise that it was dramatic, even though the result wasn’t one you were looking for.

And what about your claims around our imminent financial meltdown? Where has that come from? Your insults would have more resonance if they had some credibility, perhaps some wit. Instead, you guess and lie and believe stuff that satisfies this odd fantasy that you’ve created in your head. It makes you a bit daft.

You see, Swindon Town, my problem is that we’ve played our games and we’ve moved on. The more you badger on about signing Lee Holmes, or your youth team victories, or beating Dagenham or the fact you’re top of the league, or the shadow you cast, or that you have four stands or the way you put #oufc in your tweets about things which are only vaguely related to us, leads me to but one thought.

I do think your manager is funny, he makes me laugh and I think he’s actually added to the drama this year. I’m pretty sure that he doesn’t have the mental stability, loyalty or ability to take you much beyond where you are. But he’s done well and he’s your problem.

You’re going for the title, we’re going for the play-offs. We have different objectives. Your only influence on us now is if you take points off teams around us. If you beat them, which I’m sure you want to, then we’d be very grateful. Perhaps you’ll deliberately lose to them to spite us, but that would be silly. Then again, given that the rivalry appears to centre on everything else BUT the actual games we play against each other, perhaps you will.

Your obsession with us is worrying, you might need help. Is your team not enough for you? Really, we’re flattered by your attention, it’s sweet, but it’s getting a little creepy. You expend so much energy talking about us, I’m beginning to think, well, you really love us. If you didn’t like us, you’d go and do something else, but you don’t. I do suggest you find a hobby or something to fill up the time you currently spend thinking about us, because you’re lovely, but you’re not really my type, thanks.

So, turn around, walk away. Enjoy your season and your club. Clubs like ours don’t enjoy success very often, so you should savour it while you can. I’m sure we’ll meet again, and we can renew the argument about who is best on the pitch. In the meantime, I hope you’re happy in all you do.

9 thoughts on “An open letter to Swindon Town”