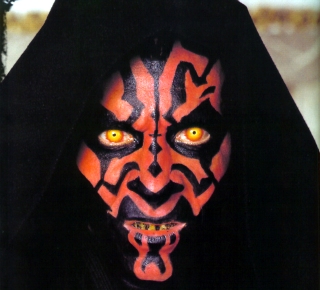 A long time ago in a galaxy far far away…

Turmoil has engulfed the footballing galaxy, Jabba The Evans has amassed a vast clone army that threatens to overrun all that opposes it. Using their ill gotten gains and mysterious resources, the army from Mos Crawley – a wretched hive of scum and villiany – is sweeping away all that stands in its way bringing fear and darkness to the galaxy.

But there is hope in Luke Skywilder and his Rebel Alliance. Jabba the Evans doesn’t believe in his sorcerer’s ways, he thinks Skywilder’s sad devotion to his ancient religion has not given him clairvoyance enough to fire the Rebels to promotion. Hokey religions and ancient weapons are no match for a good blaster at your side, says Evans.

But, the force is strong in Skywilder and he approaches the battle by launching a damn fool idealistic crusade. He deploys R2DLewis to Jabba’s lair to shut down his garbage mashers on the detention level. Meanwhile the Mel-ville-PO, the protocol droid, translates the battleground into one of his 6 million languages.

Wilder squares up to Jabba…

Jabba – He doesn’t like you (pointing at Jabba’s sidekick Doctor Raynor).
Skywilder: Sorry.
Jabba  – *I* don’t like you either. You just watch yourself. We’re wanted men. I have the death sentence on twelve systems.
Skywilder – I’ll be careful.
Jabba – You’ll be dead!

Meanwhile, in the stands, the Fanwoks, a friendly but ferociously brave tribe, follow the lead of Skywilder’s motley band by throwing down rocks of abuse onto Jabba’s forces and whittling tree trunks to destroy its AT-ST’s (which are both surpringly brittle and wholly inappropriate for the terrain).

Under a constant battery, Yellow 5, using his might and battle experience, fights a gallant rear guard action with the A Whing Interceptor, Yellow 16, picking off anything that comes in the ground attack.

Then Pittmanakin emerges from the swamp, a new hope. This is the boy who can do it all but was lured to the darkside by Jabba. He returns to strike a blow against evil. Great shot, kid, that was one in a million.

But just as it seemed that Jabba had been defeated, he strikes back, escaping with a point, able to fight another day. The stuck up, half-witted, scruffy-looking Nerf herder.

Skywilder lowers his head and says forlonly “Told you, I did. Reckless is he. Now matters are worse.”