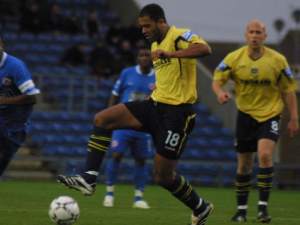 In my first job our inept office manager put a secret dossier on the publicly available shared drive. It said of me that although I had potential, they weren’t going to invest in any training and development because I was too young. This was great news; to paraphrase Supergrass; I was young, I was free, no expectations were on me.

Expectations were so low going into the win against Crawley, most people seemed impressed that the team was running around and putting in any effort at all.

Even the club are hoovering plankton from the seabed of expectation. Last year’s Boxing Day game was all about the world’s biggest Conference crowd ever ever EVER. This year tickets were being sold on the basis of the gate being slightly higher than average. Hyberbole has been replaced by practicality. Mostly the crowd was made up of the usual miserable faces and a handful of wide-eyed Canadian cousins who had flown in for the holidays.

The Oxford Mail Stand argument that developed at half time seemed to focus on the crux of the issue. The two main combatants couldn’t agree whether the first half performance was to be applauded because of the general improvement in effort, or booed because it wasn’t in keeping with the traditional (and mythical) ‘Oxford way’. Is it the team or the brand you support? It’s an interesting issue, but possibly not one over which you would threaten to slit someone else’s throat.

The catalyst for the fracas was the fact that Bloke A threw a pie at Billy Turley. Most people seemed to support the view that the improved effort was to be recognised, even if it didn’t take us back to The Glory Years. Therefore having a go at Turley, at half time with the scores equal was misplaced, to say the least.

Most fans would leap to the defence of Turley, regardless of the issue. He is Mr Untouchable when it comes to the fans. Objectively his performance up to that point had been poor; his distribution in the first half was rushed and unproductive leaving Duffy and Yemi to pick up scraps. Perhaps if the closest player to the Oxford Mail Stand were Alex Jeanin or Phil Trainer, others’ would have supported the pie throwing protest.

Both men were ginger, I read somewhere that the ‘ginger gene’ was dying out through natural selection. These two would do well not to tear each other to pieces. Do it over a woman or a piece of raw meat, fellas, not this.