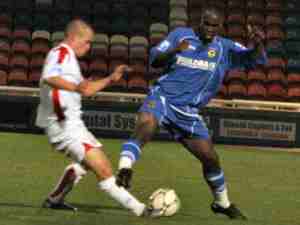 My God, it’s like landing a hot air balloon on the side of a mountain. Every time you think you’ve hit the bottom you bounce on further into the abyss.

I remember walking home from a League Cup defeat against Ipswich 10 years ago; wages weren’t being paid and our only hope appeared to be a cup run. The run evaporated before us and I thought that was the pits. Then we conceded seven twice in a season. Then there was the farcical relegation from Division 2 in 2001 conceding over 100 goals. Then we conceded two goals in ten minutes at home to Macclesfield. Then we were relegated into the Conference. Then we lost to Droylsden and Histon. Now we’ve capitulated against Rushden.

If Smith does make it through the week, which I suspect he will, Northwich is surely the last chance saloon. It’s not that Smith is necessarily a spent force, or that the season is lost, but Merry and Leneghan need to protect their business. They need the fans coming through the turnstiles and the only decisive remedial action open to them is to bring in a new manager.

But what does the new manager do first? Try to salvage the season with a slew of potentially destabilising new signings? Steady things and drift through to May? And what is the objective for the season? Is it still the play-offs? Maybe a run at the FA Trophy is a good place to start, offering a bit confidence?

Smith does appear to be a dead man walking and a change before the end of the season seems inevitable. It would take something startling to turn it around. A change earlier rather than later seems preferable because whilst the season and promotion is not yet lost, there are worrying signs that we could even slip towards the relegation zone. We’re on the edge at the moment.