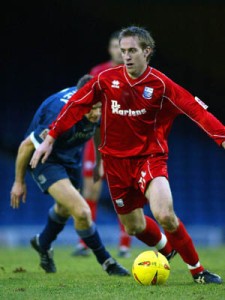 Woh, this must be what it’s like to support a Premier League team (not the Blue Square version). Andy Burgess has used his national newspaper column to SLAM former boss Jim Smith.

It’s an undignified tirade; a signature of the modern professional who has to remain in a constant state of outrage in order to secure requisite media coverage. Burgess argues that Darren Patterson should have remained manager when the Merry revolution rolled into town. On this point, I’ve got to agree. Patterson had a decent start when Brian Talbot left and was able to offer continuity. Smith knew too little of what he was coming into, he would have been better sitting back and taking stock.

But then Burgess rather shoots himself in the foot. It’s the classic myopia of the professional footballer. The suggestion is that we were in the game at half time against Orient. Fair enough, it was 1-1, but we were on course for a hiding. Lee Steele was causing all sorts of problems and Billy Turley was having a storming game keeping them out. Continuing on the trajectory we were on we were going down. For Smith to walk in and reassure the players that everything was going to be OK would have been a dereliction of duty.

It seems that Burgess’ central point is that Smith is a constant moaner. Can anyone disagree with that? His radio interviews regularly single out individuals and it does make you question what the reaction is going to be like in the dressing room.

But then, this is Andy Burgess, the most infuriating player from last year. Just as Smith was building a team around him, he went missing. Just when we needed inspiration, he disappeared. Who wasn’t frustrated by his performances when we knew what he could do; and fundamentally failed to do, for most of the season. Smith’s moaning may be like a drill to the head, but Burgess offered him plenty to moan about.

Meanwhile, the signing of Danny Rose is not a huge surprise, but it’s very welcome because he should offer the reliable creativity that was lacking on Saturday.