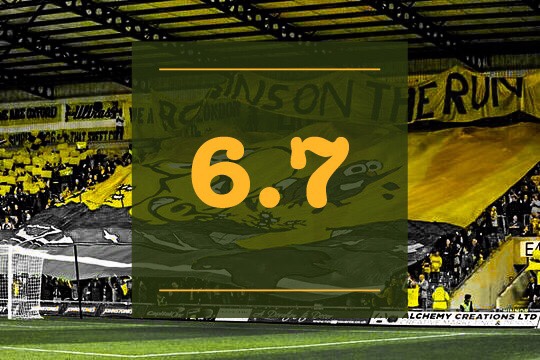 I wasn’t sure what to expect from the survey, and set myself a target of 100 responses or 1 month, whichever came sooner. That turned out to be quite conservative, there were 150 responses in the first 24 hours, and the survey ended with 297 over the three weeks it was available.

Is this a representative sample? Difficult to say, but many of the patterns were established early on and it’s reasonable to assume that there wouldn’t have been a significant shift had it been available longer, or had more responses. That said, we all operate within our own echo chamber so there may be unrepresented groups with wildly different views out there.

93.2% of those responding were men, which is predictable, although it seems a little high. If you look around the stadium on a match day, there are more than just a few hundred women. If the survey does represent our fan base, then you’d think attracting more women to the stadium would be an obvious focus. It would be interesting to know how that could be achieved – I suspect it’s not about making things pink or having somewhere to store your handbag.

What may be a little surprising is that if you sit in the South Stand, you are much more likely to go regularly home and away. 18% of East Stand supporters will go to 11-20 away games a season where for those in the South Stand it’s 23%. I suspect that this is principally down to practical issues like money and transport – if you’re younger, you probably have less access to both. Still, when you hear that the East Stand is where the most loyal and dedicated supporters are, you might want to think again.

The first question aimed to establish an overall mark of satisfaction; on average people judged their mood to be 6.7 out of ten, with 7 being the most common response. With no benchmark, it’s tricky to draw conclusions although given the season we’d had, plus an apparent lack of signings, I thought that was quite positive.

Satisfaction by age showed a curious result – if you are young or old, then you tend to be happier than average, but there is a dip if you’re 36-45. Why? The differences aren’t huge, so it might just be an anomaly. Notionally, you’d expect happiness to be dictated by a benchmark, for example, if you experienced the glory years of the 80s or the Division 2 years of the 90s. My theory is that satisfaction is less influenced by the football, more by life in general as it’s well known that those in the age bracket are less likely to be happy.

The length of time you’ve been a fan doesn’t show any particular trend; the smallest group, and also the happiest are those who became fans in the last 10 years; the least happy are those who became fans in the 2000s (17.4% of respondents); which is strange given it was the lowest point for the club in living memory, so you would think, comparatively, that we’re on an upward curve. Most fans started supporting us in the 1980s (28%) and 1990s (23.5%), showing how important the Jim Smith years were to our ongoing support.

A really surprising result was that the largest proportion of respondents (34.6%) live over 50 miles from the stadium. Putting all this together; the bulk of older supporters and the distance people are travelling, it seems we rely heavily on a core of long standing supporters with enough money and desire to travel distances to games. It would appear young, local fans are not joining quickly enough to replace them. Potentially, that’s a bit of a timebomb for the club.

What was perhaps more interesting was what is driving the satisfaction. Karl Robinson and the squad polled almost identical results (6.1 and 6.2 respectively – although that doesn’t show just how close it was). Satisfaction with the board is clocking a decidedly middling 4.9.

Admittedly, the squad is in transition and it’s difficult to know how much that influenced the results, but Robinson – often maligned and criticised – seemed to come out of the assessment positively. Although the averages are identical, more people rated Robinson at 7 than any other score – the squad’s most common score was six.

What does it mean? Well, ‘moderates’ – discounting the most extreme views – rate Robinson more highly than the squad, but opinions on Robinson’s performance are much more varied. This perhaps illustrates how Robinson has his admirers, but at the same time maintains the ability to infuriate.

Given the Board’s performance over the last year, it’s perhaps no surprise to see the results of their relationship with the fans come out inconclusively. Overall, they rated on average 4.9, with most people rating it 5, although the curve seems to demonstrate a degree of uncertainty.

The relationship between the fans and board is similarly sceptical. The average rating was a solid 5 with most people rating the relationship six. There’s not enough data to prove this, but perhaps any judgement on the performances of the board is dictated wholly by the relationship it has with the fans, perhaps hotdogs are important after all.

What was remarkable was that there was virtually no difference of opinion between those who sit in the East Stand and those in the South Stand, so even though we might have a perception that the East Stand is full of the most fervent fans, with the South more sedate, we pretty much speak as one voice.

I was a little surprised to see that nearly half of respondents thought we had progressed only a little (31%) or not at all (18%) in five years. In 2014 we were in League 2 and at the end of the Wilder/ Lenagan era with the wheels gently falling off; according to the results, there’s a feeling that our progress has been very limited despite being in a division higher with two trips to Wembley under our belt. Short memories? Maybe.

It looks like the fans are expecting no more than incremental improvements in the next five years. 39.8% didn’t expect any change, 34% only a small improvement. If the board are taking us on a great journey, the message hasn’t landed with the fans yet.

It seems a more trivial matter, but the new shirt seemed to get approval from fans rating it an average 7.0 although it’s considered only a little better than last season; perhaps a consequence of sticking with Puma and generally maintaining the same aesthetic.

Overall, the results came out more positively than I was expecting. The summer has been fairly quiet and last season was hardly great.